Who are the Top 10 Best Football Dribblers Ever Have you ever wondered who are the best dribblers of all time? well if you have then worry not because we as DailyEntertainment have compiled a list of the Top 10 Best Football Dribblers Ever. Dribbling is considered as an ”art” by football specialists and it requires tremendous concentration and alot of skill, for a player to make a successful dribble that player must have a bit of pace to get passed defenders during the game.

A dribbler in a team is considered as a key player who can unlock the meanest defenses in any team, They don’t have to be the best player in the team but if a player has abit of genius in him then well and good. Recently we have a player who is now turning to become one of the best dribblers in the world and it’s Eden Hazard, the Chelsea man has been a key player for Chelsea since joining them in 2012, he has been described as a defenders night mare, no doubt in the last 3-4 years Eden Hazard has made the most successful dribbles with Lionel Messi coming in second. But this article is simply talking about the Best Football Dribblers Ever and not the current best dribblers, if you want to know about the current best dribblers make sure you see the Top 10 Current Best Dribblers In World Football Right Now after this list.

Previously we published the Top 10 Best Dribblers in The Premier League Right Now, Top 10 Football Players With The Most Successful Dribbles in The World &Top 10 Best Dribblers In FIFA 15 According To Player Ratings if you haven’t seen them yet make sure you do after this list.

Here are the Top 10 Best Football Dribblers Ever. 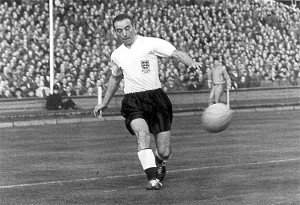 Starting the list of the Top 10 Best Football Dribblers Ever is former English footballer Stanley Mathews. He is regarded as one of the greatest players in the English game winning so much. Mathews was well known for his amazing dribbling skills and gained a nick name ” The Wizard of Dribble”, Mathews was a genius with amazing balance, great sense of timing and would get passed defenders without defenders noticing as he had great pace on the ball. He won  54 caps for the English national team appearing in two FIFA World Cups, in 1950 and 1954 respectively. He was not the best of goal scorers but he was a key player for any team he played for with his amazing dibbling skills.