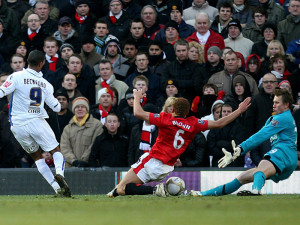 In tenth place is the rivalry between Manchester United and Leeds United . This is a game which involves two Northern English clubs Leeds and Manchester United in a fixtures that is sometimes referred to as the ‘Roses Rivalry‘. Although the two clubs are very distant from each other the emotions and feelings are still shown by the two clubs. As recent as 2010 prior to the meeting of the two sides in the FA Cup third round , former Manchester United Manager Sir Alex Ferguson described the match to be ‘Fantastic and Feisty with an Electric atmosphere’.

This fixture has become scarce ever since Leeds was relegated from top-flight competition but the clubs like all on this list have shared the spoils and Manchester United have had the most number of victories recording a total of 46 wins to Leeds United’s 26 with Sir Bobby Charlton being the top scorer of the games played between the two clubs.