Most Expensive Chelsea Signings? ever thought of finding out Chelsea Football club’s most expensive signings ? okay you can take a rest from thinking now as we have managed to compile a short list of the Top 10 Most Expensive Chelsea Signings. Many may say Chelsea FC became part of the big guns in 2003 when the club was purchased by Russian billionaire Roman Abramovic.

Previously we did a list on the Top 10 Greatest and Best Signings in the Roman Abramovich Era & Top 10 Most Expensive Manchester United Signings if you have not checked them out yet make sure you do like wise.

Let’s breakdown this list of Top 10 Most Expensive Chelsea Signings. 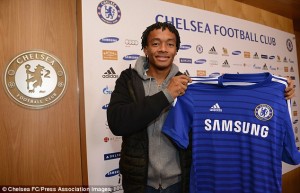 New Chelsea FC boy Juan Cuadrado starts up the list following his £23 million move from Fiorentina, The Colombian was the top assister at the summer World Cup in Brazil 2014 and was one of the instrumental weapons that led to the successful campaign for the Colombian national team. Juan Cuadrado is yet to perform very good at his new club.