So we collected the sets of players from the most recent two decades who connected up splendidly and had a very nearly clairvoyant understanding  between, and put them in our top ten list of Best Footballing Partnerships In Football. Lets have a look at some of the best attacking partnerships in football. 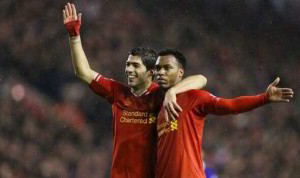 The SAS dynamic duo would have been much higher in this list. However, had they played together for a period any longer than one and a half seasons, before Suarez decided to move to Barcelona this late spring. they surely would be a massive threat in the Premier League right now.

The strikers did however, threatened Premier League defences with their splendid connection up front and Liverpool’s second-place standing last season was generally ascribed to the 52 goals scored by the couple (31 by Suarez and 21 by Sturridge). This must be one of the best football strike partnerships.