So we took a look at all the players and their retrospective skill sets, stats and performances, and with all the new Chelsea signings. Chelsea certainly has kicked off their Premier League 14/15 campaign successfully. So using a 4-3-3 formation and the Chelsea Players records from last season. It has been easy, but we have managed to compile a list wich includes Mourinho’s Best 11 and Mourinho’s Best XI This Season. Lets have a look at Jose Mourinho’s best starting XI With Chelsea FC this season. 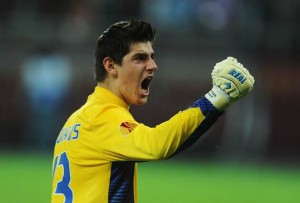 Starting off with Thibaut Courtois in goal. now some may think Petr Cech would be suited for the role and tbh Petr Cech has done nothing in the past 12 months to deserve being demoted. That being said, his competition is arguably the cup matched where he shines, Best to have Courtois playing the Premier League and Cech taking care of cups competitions.