10 Premier League Stoppers Who Had The Most Clean Sheets

Who are the 10 Premier League Stoppers Who Had The Most Clean Sheets 2014/15 ? Goalkeepers are awarded the Golden Glove based on how many clean sheets they made in a single season. And therefore when rating the best stoppers, the clean sheets they make as well as the saves to their names do matter a lot. A clean sheet is when a team or stopper don’t concede a single goal through out the game.

Let’s find out the 10 Premier League Stoppers Who Had The Most Clean Sheets 2014/15. 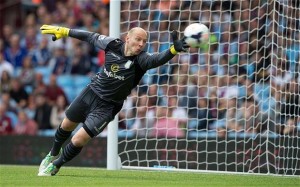 As we start right from the tenth player, its good we have an American player in our list. Bradley Edwin Guzan currently playing for the FA Cup finalists Aston Villa where he started his English Football career, having only played for only Hull City as his other English Club. He played for Hull in the 2011 season where  he was sent on loan by his club. Guzan made it to our list for having made nine [9] clean sheets that season.