Winner Of The Globe Soccer Best Player Of The Year Award 2014?

Winner Of The Globe Soccer Best Player Of The Year Award 2014? Winner Of The Globe Soccer Best Club Of The Year Award 2014? The Globe Soccer Awards are the first and only awards for the best club director and the best agent of the year together with other excellences in the football context. The EFAA (European Association of Player’s Agents) and the ECA (European Club Association), have accompanied the growth of Globe Soccer from the start and have understood its aims and intrinsic opportunities. The Globe Soccer Awards have filled the gap in the panorama of football awards to mark a season of commitment at the highest possible level. Every year Globe Soccer organizes an official Gala Dinner. In this occasion the leading footballing names from all the continents attend the award ceremony which is broadcast live on many TV Networks.

Cristiano Ronaldo is the Winner Of  The Globe Soccer Best Player Of The Year Award 2014. 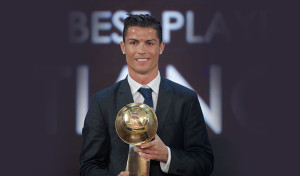 MOTIVATION: For him 2014 was just a rerun of 2013. He plays, he runs, he scores and he wins – continuously. We have lost track of his records and in Dubai he wins his third Award as best player of the year, an award which he has so far only missed out on once since it was established. He is a candidate for the Ballon d’Or 2014, after having recorded the double last year by winning in Dubai and Zurich; Cristiano is the prototype of the modern footballer, physically strong, fast, skilful and, above all, dedicated to the job he loves and determined in his preparation. The difference between a gifted player and a world-beater is in the latter’s inability to ever been banal or to have a poor patch. Ronaldo, match after match, is always capable of expressing class, energy, his competitive spirit. He plays no hold barred, to win always. Read more about the motivation at http://www.globesoccer.com/

The “Club of the Year” award will also be presented in 2014 at the Globe Soccer Conference (Dubai, December 2014). The ECA Executive Board has drawn up a shortlist from which the award-winning club will be chosen.The jury that will indicate the winner includes the organisers of the Globe Soccer Awards, coaches and former international players and leading directors from the football world who are special guests at the conference.The shortlist, approved by the ECA Executive Board, is as follows (in alphabetic order):

The Best Referee Of The Year

The candidates refereed the main finals around the globe in 2014. The competitions considered: FIFA World Cup 2014 and the 6 Champions League finals of the 6 Confederations. Europe has just one Champions League final, but also had the referee chosen for the World Cup final. All 6 Confederations have 2 referees as candidates for the Globe Soccer Awards 2014. Mexico and Tahiti both have two candidates in this shortlist. The vote to decide the best referee will be the responsibility of the Globe Soccer jury. WC 2014 Nicola Rizzoli (Italy)
UEFA UCL 2014 Björn Kuipers (Netherland)
AFC CL 2014 Alireza Faghani (Iran) and Yuichi Nishimura (Japan)
CAF CL 2014 Janny Sikazwe (Zambia) and Bakary Papa Gassama (Gambia)
OFC 2014  Abdelkader Zitouni (Tahiti) and Norbert Hauata (Tahiti)
CONMEBOL 2014 Wilmar Roldan (Colombia) and Sandro Meira Ricci (Brasil)
CONCACAF 2014 Roberto García (Mexico) and Marco Antonio Rodríguez (Mexico)

Best Club of the Year 2014 Shortlist

The Globe Soccer Best Club of the Year 2014 Nominations Shortlist:

Ajax AFC (the Netherlands), for having won the domestic Championship for the fourth time in a row, with the continuous focus on youth development.

Juventus FC (Italy), for having won the domestic Championship for the third time in a row, with a record number of points (102).

FC Basel (Switzerland), for having won the domestic championship for the fifth time in a row and for having reached the UEL quarter-finals.

FC Bayern Munich (Germany), for having won the domestic Championship and Cup and having reached the Champions League semi-finals.

Real Madrid CF (Spain), for having won the Champions League for the tenth time in the club history.

Check out the highlights of the Globe Soccer Awards Gala.