Most Expensive Football Players Cars? If you are interested in Football players and their cars then look at our list with the Top 10 Expensive Cars Of Footballers. Football players are one of the best paid athletes in the world. Earning enormous salary and brand endorsement in millions, many footballers choose to spend their money on exotic cars.

Footballers and expensive cars go together. Usually the first port of call for a young footballer is the a car dealership, and if they are any good, the cars tend to get bigger as their wealth grows, too. Below is the ten stars with the most expensive wheels, most you will recognise, but be prepared for one shocking entry! Here’s our ‘s list of Top 10 expensive cars of footballers. 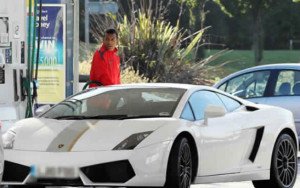 Nani makes it to the number 10 of our list with the top 10 expensive cars of footballers list with his Lamborghini Gailardo LP 550-2. The Portuguese international recently joined former club Sporting Lisbon on a season loan from Manchester United. Nani bought this £140,000 mean machine recently and he certainly has a great taste.

SEE ALSO: Fast Cars That We Dream Of Driving