Which are the Most Overrated Football players in FIFA 15? FIFA has a number of players with high ratings but the players do not deserve that rating considering the performances they display in their respective football clubs.

It is no doubt that the players are good enough but the rating is too high and we consider that as an overrated player.

Here are the Most Overrated Football players in FIFA 15. 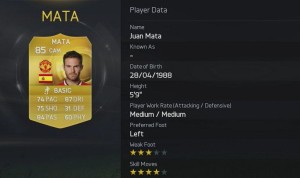 Many things changed for Juan Mata since the arrival of Jose Mourinho at Chelsea Football Club, Juan who fell out of favour at the London Club Joined Manchester United for a fee around £40 million but the Spaniard has not been on his best form at the Manchester Club.

Juan Mata should have a rating of 82 – 83 considering his performances at Manchester United and late Chelsea Football Club.