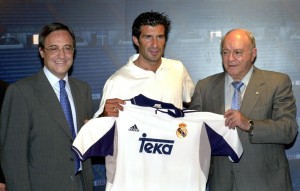 One of the most controversial transfers in football history, Luis Figo is without doubt one of the best players to ever grace the world of football. in 2000 Luis Figo Joined Real Madrid FC from FC Barcelona for a fee of £37 million making him the 8th Most Expensive Midfielder in Football History.

The same  year of 2000 Luis Figo won the FIFA Ballon D’or which showed how important he was to FC Barcelona before the move to bitter rivals Real Madrid.