What are the Top 10 Most Controversial Player Celebrations in Football? Have you ever though about which player in the World that has taken his celebration too far and caused controversy? Their are many players in different leagues of the world who have scored countless goals and have celebrated their goals, but we have decided to take a deep view in what some how is a normal thing to do after scoring. Our focus is on those player celebrations that have brought about Controversy. The list below will surely shock you on the names you will find . 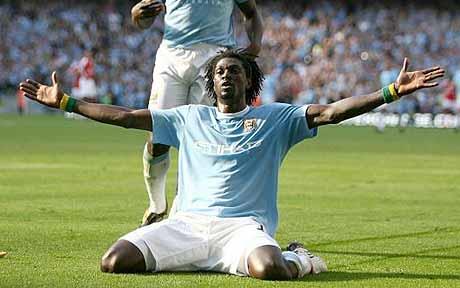 As we all know football is a game that’s full of emotions but at times these emotions get the best of the players and this causes them to celebrate in different ways. Making it in tenth place on the Top 10 Most Controversial Player Celebrations in Football is the Celebration that was pulled off by the Togolese Striker Emmanuel Adebayor.

Adebayor at that moment was playing for Manchester City and his side was hosting his former club the Gunners, Arsenal at the Etihad Stadium. After the striker scored against his former club unlike most of the players who don’t celebrate after scoring against their clubs Adebayor let his emotions known and ran across the field and slide in front of the visiting Arsenal fans in what seemed as a move to hurt the Arsenal fans. This celebration has since been called the ‘running man‘.