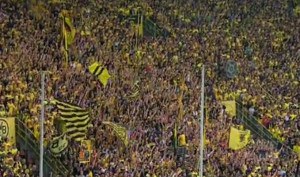 In number six is Borussia Dortmund‘s Signal Iduna Park which is mostly referred to as Westfalenstadion by the BVB fans. The stadium has a total of 80720 seats which makes it the largest Football ground in Germany. The Dortmund fans are well known for their vibrant cheers in the stands that cause jitters to the visitors especially when the are facing a rival club or a crucial game. We saw this often in their previous campaing in the Bundes Liga as they fought themselves out of relegation .