Let’s find out the Top 10 Loudest Stadiums in Football. 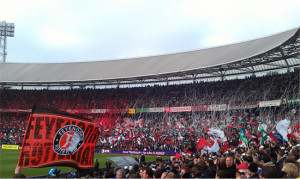 In ten place is the Dutch club Feynoord with its home ground Stadion Feijenoord. This stadium accommodates a total of 51,000 fans. Feynoord might not be the most successive in Dutch football but their fans are by no doubt the the loudest in the Dutch league with some of their favorites chants being ‘Can’t get Enough’ or ‘Feynoord Till I Die’ . The club has to its name 14 Eredivis titles.