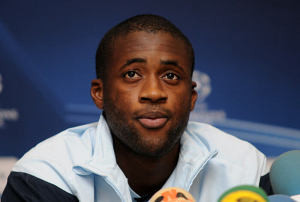 Finally the top dog on the list is Manchester United midfielder Yaya Toure‘. The former Barcelona player is one of the best defensive midfielders in the world if not also the best African player at the moment no doubts about that. Yaya Toure joined Manchester City from Barcelona in 2010 for a reported fee of £24 million and was given the number 42 which is a reverse number of the one he used to wear at Barcelona (24).

The Ivorian has been one of the key players in Manchester City‘s recent success in the Premier League and that’s why he is earning a massive €250,000 per week at Manchester City.