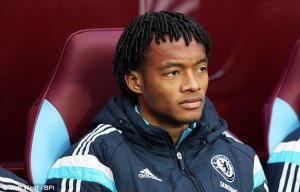 Starting ht elist of the Top 10 Footballers Destroyed By Jose Mourinho is Chelsea new signing Juan Cuadrado. After his amazingly promising World Cup displays in 2014 when he scored a goal and assisted 4 times for Colombia his national football team, Cuadrado picked up interests from several top flight clubs in Europe later to be signed by Chelsea Football Club on deadline day from Italian club Fiorentina for big sums of money and the blues had to loan Mohammed Salah their player the other way till the end of the season.

It might be so early to mention Juan Cuadrado in this list but just because since he joined the blues at the Stamford Bridge, he has been a out of favour player for club manager Jose Mourinho has he has preferred Brazilian winger Willian Borges Da Silva over their January signing.