Who are the Top 10 Chelsea Top Goal Scorers This Season So Far? Chelsea is one of the most consistent Football Club in Europe, losing only two League games this season 2014/15 and the current Premier League Leaders with 70 points, seven above Arsenal who sit second in the League . With 8 games left for Chelsea this season they are the most favourites to win the league. In this article we are going to take a dig into the players that have scored many goals for Chelsea Football Club this season.

Have you ever wanted to know which player has scored many goals in all competitions for Chelsea this season? . Don’t worry as the solution to your question is answered in this  article below. Andre Schurrle would have featured in the list but he is currently not a Chelsea Football Club player when he was sold on the dead-line day of the January Transfer window to Germany Club Wolfsburg. He had 5 goals to his name before he was sold. 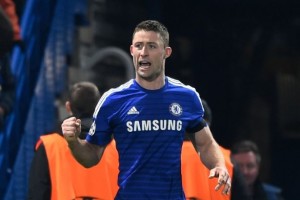 Gary top the list Top 10 Chelsea Top Goal Scorers This Season So Far in descending order with 3 goals for Chelsea this season. He scored his first goal of the season in their 1-2 win against Liverpool F.C at the Anfield in the Premier League and that goal was the winner and the other two goals scoring one in the UEFA Champions League and he scored his third in Chelsea’s 2-4 loss against Bradford City in the FA Cup at the Stamford bridge. He scored the opener then Ramires scored the second though all in vain they lost.