In England is where you find the wonderful wembley stadium but does not belong to any team as it is the home of the England national team, Wembley stadium has a capacity of 90,000 making it the biggest Football stadium in England by far.

Also look out for the Top 10 biggest stadiums in Europe as it will be published soon.

Now let’s find out the Top 10 Biggest Stadiums in The Premier League. 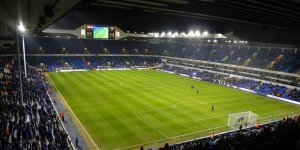 After numerous renovations of the stadium from 1899 when it was built, the White Hart Lane now has an all seater capacity of 36,274 . White Hart Lane is London based stadium for Premier League club Tottenham Hotspur and it is the tenth largest stadium in the premier league.The East stand of the White Hart Lane, known as the Worcester Avenue holds the most club fans only to be followed by the Paxton Road stand in the North.