which are the Top 10 Biggest Stadiums in The Germany Bundesliga ? If you were looking for the very largest football stadiums in Germany, then here is your answer in a short list of the very biggest ten stadiums. And also for those who would wish to know the ten clubs with stadiums that hold the biggest capacity in the Germany Bundesliga, know what capacity does the home ground of Bayern Munchen, Borussia Dortmund, F.C Schalke 04 and Borussia Monchengladbach do hold then just read through this list.

Top Ten Biggest Largest Stadiums in the Bundesliga By Capacity 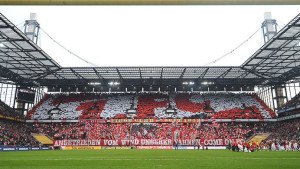 Starting the list of the Top 10 Biggest Stadiums in The Germany Bundesliga is the RheinEnergieStadion With a 50,374 seater capacity. RheinEnergieStadion is one of the top ten largest football stadiums in Germany and it stands as the tenth though the eleventh in Germany. In 2004 this stadium was awarded a bronze medal for distinguished sporting and leisure facilities by International Olympic Committee

The stadium was one of the grounds that hosted the 2006 FIFA World Cup games in Germany and has been the home ground of F.C Koln from 1948 to date.