What are the Top 10 Best Kits for the 2015-16 season? The new season is starting only one thing you have to find out is what kits are the teams going to be putting on? and which one is the best of them all? Well we have prepared a list of the Top 10 Best Kits for the 2015-16 season. Not all kits on this list have been confirmed by each and every club as some of the clubs have not revealed their kits yet, but we have some leaked photos which are quite real.

Not so long ago we published the Top 10 Highest Selling Club Soccer Jerseys, Top 10 Best Sold Soccer Jersey Names, Top 10 Most Expensive Football Kit Suppliers Deals, Top 10 Biggest Shirt Sponsorship Deals in Football 2015 & Ugliest Football Kits Ever if you haven’t seen them yet make sure you do it after this list. 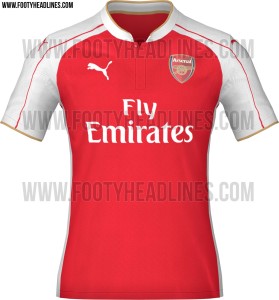 Well has done it again with another good looking kit for Arsenal Football Club. The Bavarian based company has again come up with a good kit for Arsenal to be worn in the 2015/16 season. it has been reported that the new Arsenal kit will be red and white with red linings as seen in the picture above. The other kit will be in gold their first Gold shirt since the 2002/03 season.

During the unveiling of the home kit at the Emirates, Spanish midfielder Santi Cazorla came to the defence of the club saying that “We need to make sure that the positioning of our backline is strong and always stays that way. Last season we lost so many points against small teams at home, and if we want to win the league we can’t lose those points.”