Best Football Stadiums In The World 10 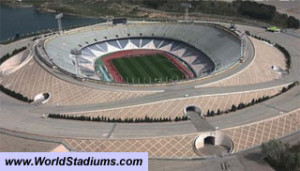 The Azadi Stadiumwas built in 1971 it is the home stadium of the Iran National team it is located in Tehran Iran the stadium can hold upto 95,225 spectators which makes it one of the biggest stadiums in the world. The Stadium is surrounded by a river and training football pitches.

SEE ALSO: Stadiums In The World That Are Haunted