Who are the Top 10 Assist kings 2010-2015 in the Top 5 European leagues? Football Fenatix turn to look at who are the Footballers With Most Assists Around Europe in The Top 5 Leagues, in which the Top 5 Leagues are Premier League, France Ligue 1, Serie A, Spanish Laliga & Germany Bundesliga.

Sometimes the Top Assisters in the world are deemed to be one of the most creative players on the pitch as they make key passes with their creativity, an example of a very creative player in the Premier League is Belgium and Chelsea winger Eden Hazard not only is he the best player at Chelsea he is also the best player in the Premier League and recently won the PFA Player of The Year Award.

Top Ten Footballers With Most Assists in The Last 5 Years

Recently we published articles on the Football Players With Most Assists in The Premier League So Far 2014-2015 & PFA Team of The Year This Season 2014/2015 if you haven’t gone through them yet make sure you do it after this list.

Let’s now find out which Footballers have made the Top 10 Assist kings 2010-2015 in the Top 5 European leagues. 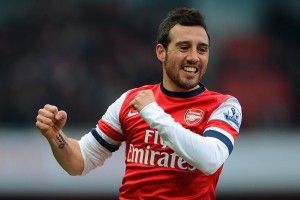 Kick starting the list of the Top 10 Assist kings 2010-2015 in the Top 5 European leagues is Arsenal playmaker Santi Cazorla, the Spanish maestro is just like fine wine the older he get’s the better he becomes, the midfielder who turned 30 late last year has been the king of midfield at Arsenal since his arrival in 2012 but has faced competition after Arsenal purchased German playmaker Mesut Ozil from Real Madrid in 2013 for a record breaking £47 million. Nevertheless the Spaniard has still shown he is one of the best play makers in football at the moment as he has assisted 42 times in the last 5 years part of the assists coming when he was playing for Malaga in the Spanish Laliga.