Most Valuable Footballers Currently On Loan 2015

The 11 Most Valuable Footballers Currently On Loan

Which are The Most Valuable Footballers Currently On Loan? Well the season 2014/15 has produced someof biggest loan deals in world football, we all know that football is undoubtedly the most popular sport in the world.

When a club is full of talented players and their is not enough room for other players to feature in the starting XI, the clubs may decide on what’s best for the footballers of the club, some are sold some are loaned out for different number of reasons either to develop in a new environment which the parent club is not offering some move because of lack of playing time at the parent club.

Previously we have done articles on Richest Football Clubs in The World Right Now, Richest Football Players in The World 2014 & Richest Football Club Owners in The World 2015, Below we have made a list with the Most Valuable footballers Currently on Loan 2015 we will be counting down to this list to we reach the most valuable player currently on loan please keep in mind that the market value has been converted into United States Dollars. The List below is about the to league’s in the world and contains loan moves from the summer transfer window 2014 and winter january window 2015, Enjoy The Top 11 Most Valuable Footballers Currently on Loan 2015. 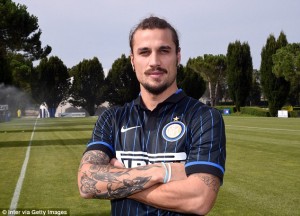 Dani Oslvaldo also known as Pablo Osvaldo is well known for his ponytail, The striker is currently on loan at inter Milan from Southampton where he did not have the best of spells a player can have. Dani Osvaldo is enjoying his time at Internazionale where he has scored 7 goals in 13 appearances for the Italian giants. Osvaldo has a market value of $13.4 million.