We cannot over emphasize the need to have automobiles. They enable us get to places of work faster, carry an extraneous amount of luggage with us and also enjoy the ride. At times though, these human crafts just seem to be wearing us down at every single opportunity they get. This can be from them breaking down to rolling over in the parking lot and so on. In all these, we are expected to come up with logical solutions even for not so logical problems. Here is a collection of hilarious car problems just for you! 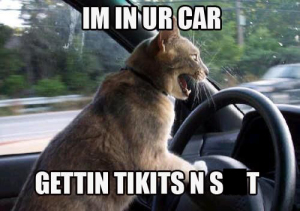 You thought that you left your car safely locked only to come back and find that it has been whisked away by a purry friend. When on the road, all the other drivers are clearly worried by something. One of them finally gets the guts to speak up. Clearly, they all silently pray hand that the cat sticks to its lane and doesn’t cause any accidents. Even if it did, it wouldn’t be liable. Back in 1957, this automobile was perhaps the envy of them all with its curvy sides and round torches. Its time is well past now and all that remains are shackles that are so rusted that they would infect you with a rare disease from miles away. As you can probably contend with, it has seen better days and all that it wishes for now is to have a peaceful rest tucked away in an old barn somewhere. Whoever owns it should grant its dying wish before it’s too late. Or is it already too late? 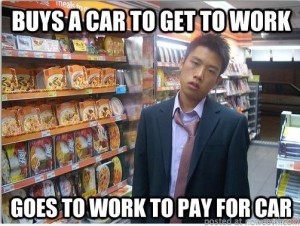 Back when our dear friend Harry here didn’t own a car, he would always runt, at every opportunity, about how he was working hard to acquire one. As it turns out, he did not live by his word and instead, sought to acquire one without really working hard for it. Well, now all the worn down Harry does is report to work very early and leave very late. Want to know they reason why? He bought a car to get to work and now all he does is work to pay for the car. 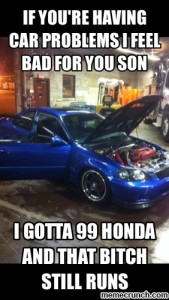 We all love pimped out rides, no matter how old they actually might be. For sure, the proud owner of this ’99 Honda deserves an insurmountable amount of credit. At its age, we would say that it looks pretty sharp due to all the tuning that has been done on it. Logically speaking though, it beats sense why the owner would go into such huge trouble and out of his way. No matter how much new gear it has got, it still remains to be a ’99 Honda and no one can contest that fact. In the first world countries, it not much heard off to have a race car laden with as much problems as those owned by this model of a race car. The engine looks beat with many missing parts but believe it or not, this still has the potential of being enlisted amongst luxury cars. Well, of course not in the first world. More like in other countries where cars are still a rare commodity. This clunker would be so much fit and groomed in other countries that we can comfortably say that it is just in a transition phase.

5. We Totally Feel For You Hey, don’t give her those nasty stares. She is facing life-threatening car problems here for crying out loud, literally! You would probably know what she is going through if you have ever had the unpleasant experience of having to go to Disney World or a large public university. It’s crazy, period! Go on girl, let it all out. Perhaps a misconceived guy will notice your plight and act like a gentleman. When you get your parking space though, the joy will be so overwhelming that you will floss about it endlessly. 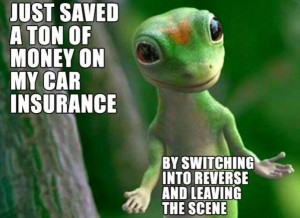 If you indeed posses lucky streaks like you have always been blubbering about, this might be your luckiest day ever. Up to 15% will be saved within the snap of a finger. All you have to do is press hard on that gas pedal and run over this tiny Geico Gecko. In the corridors of law, this will nonetheless be treated like any other hit and run and you re at the risk of doing some serious gecko time here.

3. There Is Your Problem 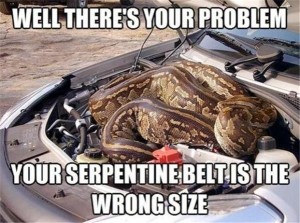 In addition to having an enviable amount of horsepower, this can has an additional snakepower too. We’re not just talking of some witty tinny snake power; it’s big and it’s large. It will get you virtually through anything. No fuel injectables needed here. It’s more of venom. You’ve pretty much done some very interesting work under the hood here no wonder it’s being kept open for all and sundry to see. Good job on the serpentine size belt. One phrase will just about cover it here. Solar is not good for a luxury Porsche and the CEO who owns it. It hits so hard that both of them will start melting away into oblivion, never to be seen or heard from again. It’s a catchy sight though. It’s much like what happened in the Wicked Witch. The amounts of sunlight were too excessive here and both of them just couldn’t take the heat. It’s a fact that can not be contested.

1. There Are Workable Solutions If you were to be asked, what makes smart cars so much fun to have? Your answer would probably be that they have an incredibly high mileage per unit gas. This assumption, albeit correct, is not what we are after here. It’s more like, they are really easy to tip and toss with one hand!