It’s Outright Weird How These People Put These Stuff in Their Very Bodies. Do you happen to be extremely worried just because you took the wrong snack for breakfast? Take a breather. You will be amazed to realize how other people have put grossly harmful stuff in their bodies. This is not mentioning that all of this stuff are not edible and can cause grievous harm to their systems. But somehow, they have managed to stay alive.

How These People Put These Stuff in Their Very Bodies!? It’s like they have this irresistible urge to gulp up really strange stuff. Lets take a look at some funny radiology pictures. 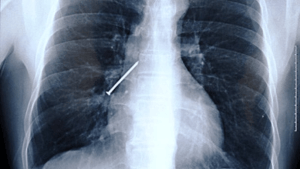 We all know what nails are used for; joining pieces of wood together or fastening iron sheets to wood when roofing a house. Apparently, not all of us know that. To some, nails are a delicacy and some form of snack that can be taken when one is extremely hungry. This person gulped up a nail and now it is resting in a certain part of his tummy. It does not seem to be coming out any time soon judging from the way in which it is positioned. 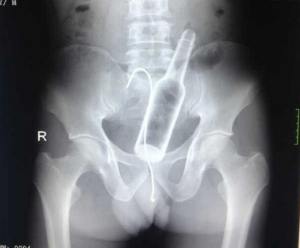 If you thought that ingesting nails was bad enough, you are just being introduced to the world where people do the craziest stuff you wouldn’t even think of. For this particular instance, we are going to assume that the person didn’t want to spare even a drop of his favorite wine. To make sure that all went into his system, he thought it wise to swallow the entire bottle of wine. Now he has bigger problems to contend with after he woke up from his drunken stupor. This might be a student. Wait a minute it has to be an accountant. Apparently, she was having a really hard time balancing the sheets. Judging from this, she has decided to take it all out on the pen that is presumably responsible for not balancing the sheets appropriately. As you can see, the pen’s pointer is visible and this can only mean one thing. The hunter has now become the hunted. The pen is doing a pretty interesting job of balancing the sheets in the stomach and the accountant is now experiencing excruciating pain all from his doing. This might not have been a very bright idea right from the start. For some reason, a key seems to be the worst item one can ingest. Unless the person had a spare one, he is going to suffer the wrath of sleeping outside in the cold for several nights until he gets the key out of his system. For all purposes and intents however, we are going to assume that it was a survival tactic. Perhaps burglars pounced on him and he thought it best to swallow the key and deny them access to his manor.

6. A Flurry of Cobblestones Has the World Health Organization sanctioned the consumption of Cobblestones already? I thought that was supposed to wait for several amendments to be made. Oh well, this bill chucky has surely bent the laws here and should be arrested and prosecuted. This is for being in possession of cobblestones and for ingesting in large amounts. We presume that the stomach has taken a bit too much weight and might be forced to give in. As for whether he can alternatively throw up and save himself from a lot of pain, that clearly defies the laws of gravity. 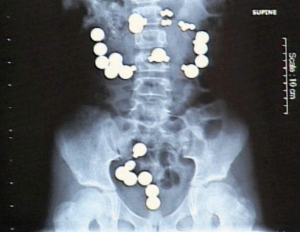 Oh, I know what’s going on here. Some dude wants to become the new chick magnet in town. To achieve this, his not so clever friends have advised him to gulp up as many magnets as he can possibly find. Lucky for him, they come in small sizes and he has had quite an easy time swallowing them. Even after doing all this, he is feeling like such a loser. No chicks have noticed him yet, let alone being attracted to him literally. The only things that have fallen for these magnets are the ions in his body.

4. A Barrage Of Coins We have a sure winner here. One who has figured out a way of how to take his earthly possessions with him to heaven? The person must have spent an awfully long amount of time swallowing all those coins. From where we stand, they look like they could add up to several grand. That’s not so bad for the dude considering that they are his entire life savings. In giving credit where it is due, he was wise enough though. He didn’t swallow his possessions in form of bills since they would have easily been digested. 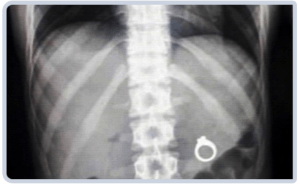 Oh this is really bad. The whole world is going to think that the engagement is now off. How did this come about? Let’s try and recreate the whole scenario. The fiancée comes with a diamond engagement ring after months and months of saving. As a way of trying to be creative, he puts it in the soup as they go out to dinner. On that particular day, the fiancée is so hungry and gulps down the entire bowl of soup at a go. And there you have it, a wedding proposal gone really badly. 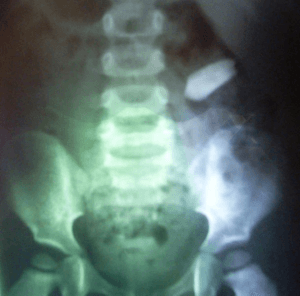 Was this one trying to commit suicide? I mean, how do you ingest a bullet of all things? Perhaps it was a felon who wanted to hide evidence so badly that he literally decided to bite the bullet. Well, its one way to go out. When he eats really hot food, the bullet is going to explode! This, indeed, is very practical. Was this person so busy when eating that he or she forgot what they were doing? That is the only sane reason that exists for swallowing an entire spoon after eating. Next time, try and concentrate on the dish that has been served to you and eat with your bare hands, you might swallow a finger though.