Facts and The Truth about Tattoos

10 Facts and The Truth about Tattoos

What you need to know before you get a tattoo! Some people are fond of artistic work being done on their bodies, commonly referred to as tattoos. For most people, they clearly know how to go about it and attach meaning to their tattoos. For some however, they either do it to get attention or do it meaninglessly without really knowing whether their tats have a meaning or not. Where do you lie? You need to know these ten things before getting a tattoo!

10. Getting a tattoo really hurts 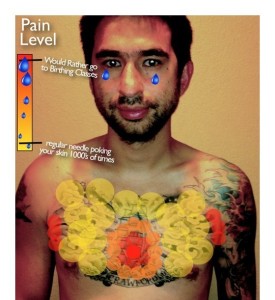 Anyone who has had tattoos done on some specific parts of their body would gladly tell you that at times, it’s not all fun. You have to undergo through excruciating pain when getting tattoos done on the central part of your chest or on the extreme ends of your chest. This pain does not wear away easily and so you better have some guts before embarking on this torturous journey as it will have tears streaming down your face. This dude even prefers to attend birthing classes instead of the pain; it’s that serious!

9. People have various views on tattoos 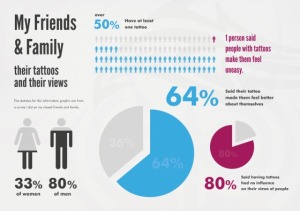 Getting inked lasts forever but trends don’t. As of today, there a views that over 50% of the population has at least 1 tattoo. Of this, one of them feels uneasy. A whopping 64% hold the view that tattoos make them feel better. A certain survey conducted earlier also indicates that 33% of women have tattoos whereas 80% of men have tattoos on them. Though 36% of people with tattoos don’t attribute that the tattoos make them feel better, it is common knowledge that 80% of people interviewed said that having tattoos had no influence on their views of people.

8. Tatto regions on girls that hurt most 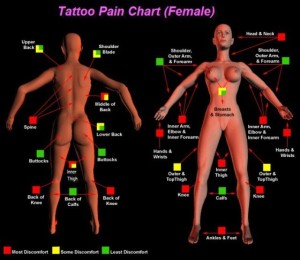 For any girls out there holding the thoughts of having tattoos done on them, here is a chart that explains the regions of the body that tend to hurt most. From the onset, if you are extremely nauseous about pain, boney regions of your body should be a no go zone. These include the spine, the head, the neck, the hand wrists, inner forearm and elbow, the knees and the inner thighs and finally the ankles and feet. There are also areas that experience some minor discomfort. They are inclusive of shoulders and upper back.

SEE ALSO: Must Knows Before You Get Inked

7. It Clearly Seems To Be a Hipster Thing 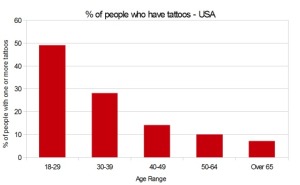 In the application of tattoos, it is critical to note that age is a distinctive factor. Funny as it seems, the tattoo culture will wane away into thin air at some point and for quite a logical reason. Do children want to have exactly what their parents do or do they want to digress from the norm? The latter, we would presume. In the U.S today, the trend shows that the highest percentage of people with tats are aged 18-29 with the least percentage being over 65. Are we on the same page?

6. We Have Gone Tribal

The tattoo fever seems to have caught up with a huge percentage of the population in the U.S of late. Though this was not the trend in earlier days, it has been largely contributed to by factors such as social media and the likes. Borrowing from credible statistics, it is indeed a phenomenon to realize that over 45 million of Americans have one or more tats on their bodies. The most discerning fact is that a whopping 40% of 20 to 40 year olds sport tattoos; this is not Polynesia. 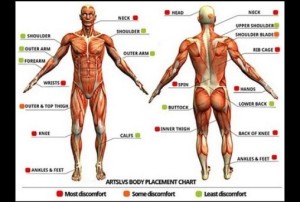 These include the spine, the head, the neck, the hand wrists, inner forearm and elbow, the knees and the inner thighs and finally the ankles and feet. There are also areas that experience some minor discomfort. They are inclusive of shoulders and upper back. This is an amazing chart we assure you that you wouldn’t spot in a tattoo salon. What would be the point of ruining their own business and making clients change their minds about having tattoos done on them? To be precise, it would be very hurting to the business.

4. Common tattoo locations and placements on the body Did you know that every spot on the body tends to have tattoo significance and can be read? Well, now you know and we will elaborate that to you soon enough. We give you personal tattoo astrology in form of a chart and enable you to know what the next big thing in tattoo body readings is. A tattoo on the stomach sends out a strong message that the tattoo will become ugly if weight is not maintained. A tat on the back side is a denotation that the bearer is living life to the fullest.

3. Tatoos will not look good when getting old The bare truth is that some day, and perhaps not very long from now, the hipsters will be old and grumpy but the tats will still be on their wrinkly bodies. Hopefully by then, they won’t give a care in the world. As a matter of fact, they might as well flaunt their wrinkled tattoos bare chest. A thought for them to delve on; what are they going to do when they end up looking like every other old dude with wrinkled tattoos? Well, just hang out. The Chinese population is always known to be ballooning steadily and exponentially. It is the largest in the entire world and it doesn’t seem to be letting up any time soon. Perhaps one day, they are all going to wear lame English word tattoos on their bodies with absolutely frivolous meaning. When that happens, that will surely be a day to reckon.

1. The Meanings Attached To Tattoos Some of you might be wondering why there is a portion of the population that is not so keen or hell bent on jumping into the tattoo bandwagon. Well, it has to do with the meaning of some tattoos. Plastering tattoos all over your face is clearly a cry for attention while a visibly unfinished tattoo on the backside means more than meets the eye.

SEE ALSO: Must Knows Before You Get Inked