Looking for funny Facebook statuses fails? We have compiled a list with Ten Funny Facebook Posts fails. As a social site, Facebook is used by virtually all people who are tech savvy. Even though they may have a knowhow on what’s trending, sometimes Facebook users are just hilarious from the posts they make. If not outright funny, some of these posts actually make you feel like you want to rip someone’s head off. Some jokes are in such bad taste that you tend to wonder what the person who wrote them was thinking. 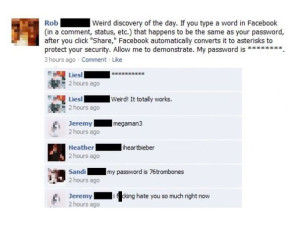 Somehow, there will always be someone who makes the weirdest of discoveries on Facebook. Some of these discoveries are just outright lies. In a world populated with over 7 billion people, there will always be someone on the other end who will believe every word of the discovery and even go ahead to try it. Rob here mysteriously discovers about passwords and being the good lad that he is, passes along the message to his fellow Facebook users. He is lucky because he even manages to squeeze two passwords out of his friends.