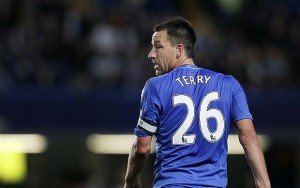 “A fantastic leader and a key figure at Chelsea over the past decade, when they have won every trophy in sight, despite the managerial changes.”