10 Best Football Defenders Of All Time

Football is one of the best sports in the world and is the most popular sport in the world without any doubts and has been made popular by some of the players on this list. You should look out for the Top 10 Greatest Strikers of All Time.

Recently we published the Top 10 Most Expensive Defenders in Football History & Top 10 Best Defenders in The World 2015 if you haven’t seen them yet make sure you do after this list of the Best Football Defenders Ever.

Let’s count down to the 10 Best Football Defenders Ever. 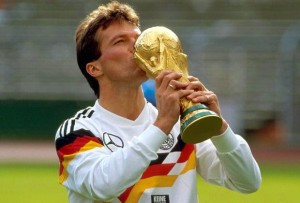 Starting the Best Football Defenders Ever is German former professional footballer and current football manager. Lothar Matthaus has played in five FIFA World Cups and holds the record of most matches played by a single player which is 25 matches. He is considered as one of the best defenders of all time but also played as a midfielder most of the time. Matthäus is also German‘s most capped player with 150 appearances for the Germans, at the age of 38 he was voted the German Footballer of The Year.