Who is Arsenal Highest Paid player Salary? Lets have a look at the Arsenal Players Salary List 2014-2015 based on the contract details to find out who is highest paid players in Arsenal football club.

Arsenal Football Club is one of the most followed and 4th Richest Football club in the world, just behind the likes of Manchester United and two Spanish power houses Real Madrid and Barcelona, and thats according to Forbes most valueable football clubs in the world, they have a strict wage policy in place, where players are divided into different categories and they are paid the same amount of money as other players in that category, well thats what it seems if we look at the official wage structure of Arsenal. 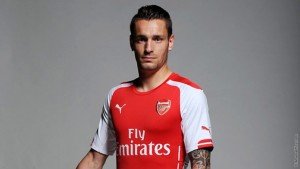 The new Arsenal signing has just arrived is one of the highest paid Arsenal players, Debuchy who joined Arsenal from Newcastle United, Mathieu has been in great form for Arsenal Football Club and has already scored a goal from right back position.

Mathieu Debuchy earns £70k per week at the London club.