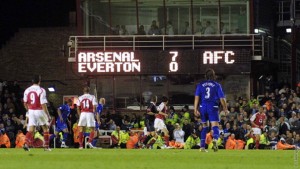 Starting the list of the 10 Biggest Winning Margin Games in The Premier League is the game between Arsenal and Everton which ended in a 7 nill win for the Gunners way back in 2005. Robin Van Persie opened the scoring just 8 minutes into the game, 4 minutes later Pires scored to make the score line 2-0 to Arsenal Vieira also found the back of the net in the 37th minute before Pires scored again in the 50th minute to put the game to bed at 4-0 though Arsenal weren’t done yet. In the 70th minute Edu scored a penalty which was followed by a goal by Bergkamp before Flamini put the icing on the cake.